Political capital, the “trust, goodwill, and influence a politician has with the public and other political figures”, is most likely distributed along a power law.

Power distributions show up all over the social world, especially in competitive markets like product sales, play counts of songs on the radio, or populations of cities. 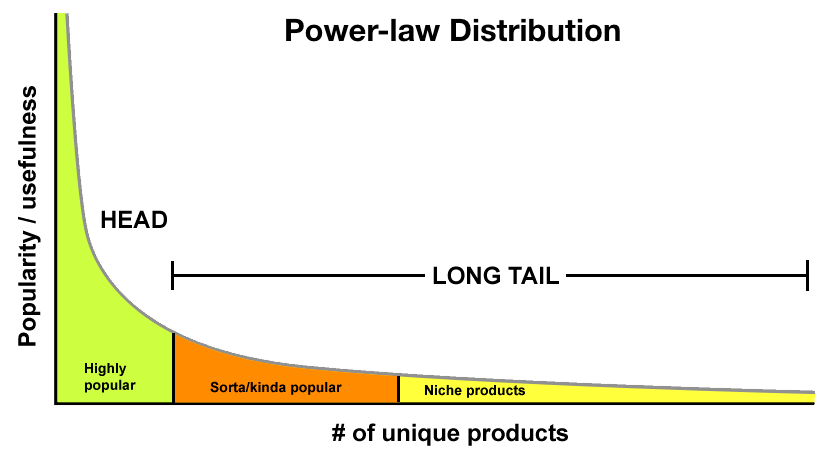 Massive winners on the top, called the Head, and then many more participants with less percentages of the whole, called the Long Tail.

Compare this to the distribution of votes for US President for the last 40 years: 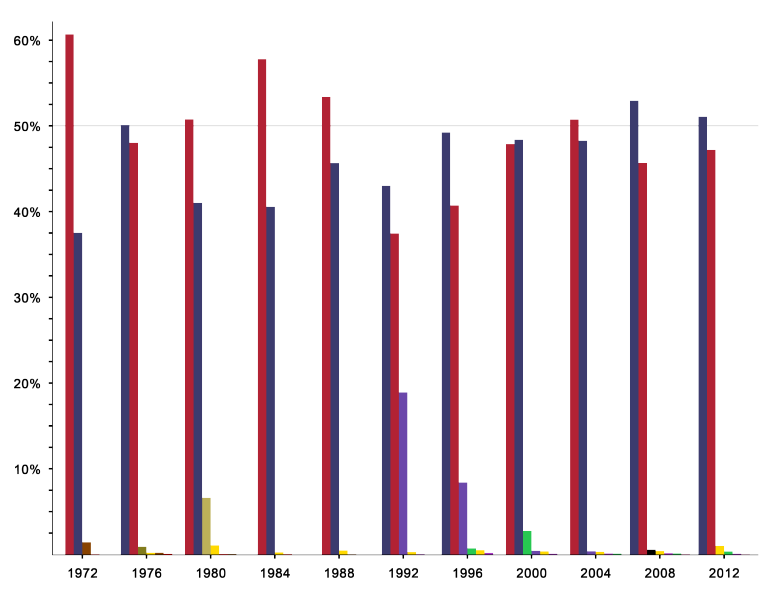 See how each of those individual elections resemble the head of a power distribution?

Our current electoral process cuts off the Long Tail.

Power distributions found in nature will often have more than half of their total distribution in the Long Tail.

But the chart of presidential votes shows how our elections create a duopoly, with two outwardly competitive actors having near complete control of the market. By awarding 100% of the political power for winning only 51% of the votes, two frontrunners gain a massive handicap.

In a country of over 300 million, this leaves most of us out of the conversation.

And we can all too easily observe that not voting — “None of these options are worth my time” — is almost always the most popular choice in our elections.

But it doesn’t have to be this way.

Amazon unlocked the Long Tail of consumer goods, by creating an online store with infinite shelf space. They never have to say “no room” for any product, even if it’s individually not very popular.

One employee famously said, “We sold more books today that didn’t sell at all yesterday than we sold today of all the books that did sell yesterday.” In other words, people wanted more niche books combined than popular books combined. This gives them a huge advantage over brick and mortar stores.

YouTube unlocks the Long Tail of video creators, by giving anyone who signs up a stage and a way to reach their audience.

And consumers sure seem to like it: YouTube is on track to surpass all of TV’s combined viewership hours.

Voters can choose among anyone to represent them, rather than being limited to a small number of predetermined candidates. Community leaders can make a meaningful impact, without first needing 51% of the voters.

Many more people can participate in our political processes, and we can all have more options for better representation.

Liquid US makes this possible today.

« Give Your Rep an F: Introducing Liquid Scorecards Star Power in Liquid Democracy »