Four years ago, an infamous study by professors from Princeton and Northwestern Universities reached a dramatic conclusion. As they wrote:

Multivariate analysis indicates that economic elites and organized groups representing business interests have substantial independent impacts on US government policy, while average citizens and mass-based interest groups have little or no independent influence. 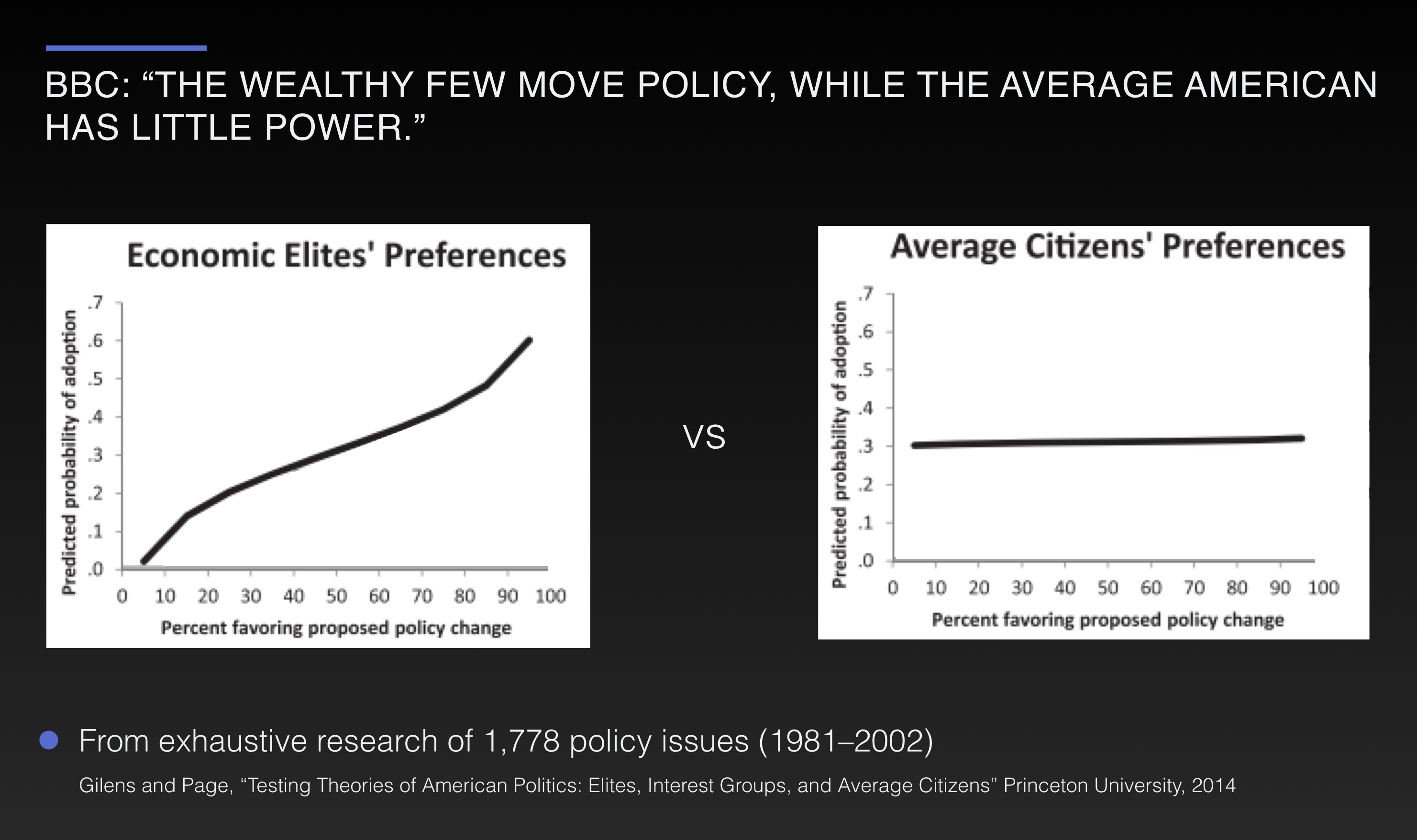 Our current president put the situation more succinctly on the campaign trail.

When you give, they do whatever the hell you want them to… I will tell you that our system is broken.

The uncomfortable conclusion is that American democracy has become a façade propped up by powerful special interests. It’s not hard to see. Gallup reported in 2007 that 66% of Americans perceived corruption as “widespread throughout the government in this country.” In 2015, that number had risen to 75%.

Outside money heavily impacts both major political parties. The Congressional Research Service has reported, as summarized by researcher Lee Drutman:

Corporate lobbying began to exceed the combined House-Senate budget in the early 2000s, reaching 2.6 billion dollars per year in 2015…. For every dollar spent on lobbying by labor unions and public interest groups together, corporations and their associations now spend $34.

We can already observe the effects of this imbalanced system. And taken far enough, corruption can lead to societal breakdown. The IMF warns that “distrust of government can become so pervasive that it can lead to violence, civil strife, and conflict, with devastating social and economic implications”.

The Root of the Problem

Part of the issue is that all our legislative power is in the hands of people who have won elections. For our nation, that’s the 535 elected Members of Congress—or 0.00016% of the population.

There are a number of good ideas to address these issues of democratic corruption. But there is a new paradigm called liquid democracy, that’s worth paying particular attention to.

A liquid democratic legislature can be orders of magnitude more resistant to corruption.

In one sense, this can be demonstrated by a simple equation.

Consider that right now, there are 535 elected legislators for the United States—100 in the Senate and 435 in the House.

Assume for the sake of simplicity that it costs $50,000 to swing an individual vote. (What do you think all those companies are paying for, after all?) Then the cost to “capture” a majority of the legislature would be as low as $13,375,000: well within the reach of a corporate lobby.

Whereas, a liquid democratic system can scale to include thousands of times as many active participants—elevating the cost of capture by the same scale.

It’s not that corruption goes away entirely, but it can become much more difficult.

Some have raised the question whether having many more lawmakers might allow nefarious deals to more easily slip through the cracks. But the whole reason corruption is effective today is because of the relatively minuscule number of legislators, who each represent an average of 700,000 constituents.

With a network of liquid proxies reaching between each citizen, the activity of corruption would have to be undertaken at massive scale—and leave similarly massive amounts of evidence.

Furthermore, in a liquid system, constituents can override their representatives’ votes, or even replace them “on the fly” if they’re no longer trusted. This means genuine accountability.

And in every individual instance, both briber and bribee are still breaking the law, facing fines up to $10,000 and 2 years in jail, per instance. The reward just isn’t worth the risk.

Compared to our current situation, liquid democracy can have a massive impact towards reducing corruption in our legislatures.

There are many other efforts to reduce political corruption, and we whole-heartedly support them.

But importantly, working towards liquid representation has a huge strategic advantage, because we can begin to adopt it immediately, without any legal changes.

We don’t need to wait on legislatures to pass new laws against their own entrenched interests, or expect courts to reverse previous decisions.

All it takes is 51% of voters in a single district — enough to elect a Liquid Candidate — to immediately upgrade that district’s representation.

This is only a matter of time.

Help make it happen by joining Liquid US today.

Our first priority today is to defeat utterly those forces of greed and corruption that have come between us and our self-governance.