“Gerrymandering: the intentional changing of electoral boundaries for their benefit”

— CGP Grey: “Gerrymandering Explained” (one of the best videos on the subject)

Gerrymandering is one of the dirty tricks that politicians can use to rig elections, creating disproportionate representation. 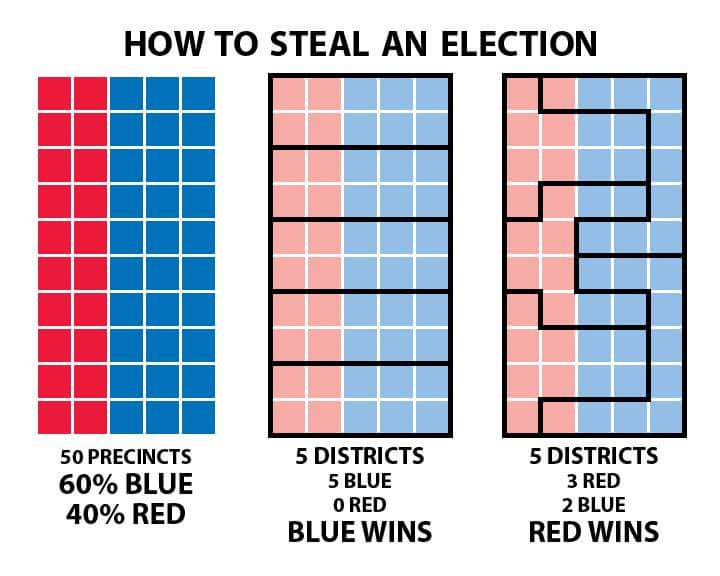 73% of voters — Republicans, Democrats, and Independents — support removing partisan bias from districting, “even if it means their preferred political party will win fewer seats”.

Barack Obama believes this is such an important issue that he said he wanted to make fighting it a big focus of his post-presidency.

And the Supreme Court is expected to review cases later this year. But it’s unclear how that will go, or even what options are available.

Gerrymandering has long plagued American democracy. The term is named for an 1812 politician, after all.

One common narrative is that it’s more often done by Republicans to disadvantage Democrats, and there’s lots of evidence for that lately, but Democrats do it too.

There’s no inherent reason for only a single party to do it. One group may simply be better at it.

Instead of framing it through a partisan lens, it’s more useful to see the technique as one way established politicians rig the democratic process for their re-election, keeping new voices out.

At its heart, gerrymandering comes from abusing the intrinsic flaw in trying to group millions of people into a single electoral seat.

Creating imaginary lines for people like that is never going to be easy, and there will always be fights over borders.

Liquid democracy addresses this issue at a more fundamental level.

We can include every voice, and still have trustworthy representation.

Thanks to Liquid US, we can start to restore representation today, without needing to first pass any new laws.

In the future, as we elect more liquid democracy candidates, we can proportionally distribute their assigned votes on legislation to more closely match all constituents, combined across every liquid democracy district, completely erasing old gerrymandered lines.

« The Power of Networks Liquid Democracy Candidates: How to Upgrade Our Legislature, One Seat at a Time »